TL:DR Summary: There are a lot of nice things about the FitBit Charge 2 but they don't make up for the substandard construction and the fact it is sold as having features which are not actually fully available to all users.

First post in an absolute age! I've not really been very successful at training for much for the past couple of years; depression, anxiety, tiredness, busy-ness.... all of these conspired to take me off the trail and onto the sofa. However, I decided that 2018 was going to be my year to pull it back before I hit the literal middle of my 30s. And I've achieved a lot, I'm pretty pleased with myself which is not a familiar feeling for me. I am going to write more positive posts later about what's worked for me and how & why I think things have improved.

But why not start on a slightly negative note?! After all, that way, things can only move on up.

Early in the year, I made, what for me was, a big choice to invest in a fitness tracker. Big, because I basically work for myself and have very little in the way of cashflow. Apparently, starting a social enterprise doesn't make you rich, so dropping £100+ on something means I have to go without something else. That's obviously fine, if the benefits outweigh the cost, so I made sure to do my due diligence I put some time into research, and the FitBit Charge 2 seemed to fit best with what I wanted namely:
(Aside: for what it's worth, I know the snort of derision you just let out. I hear it every day and tbh I'm kind of over it. Yeah, I've still got a Windows Phone - why the.... why would I waste the resources (both mine and the world's) on getting a new phone when I have one that functions well? Basically the only reason is: app writers don't write apps for my phone any more - that's not my phone's fault. We're mates, we've been through a lot together. 20 years straight with a Nokia phone; it'll be a difficult break when it happens. /end rant)

Aiight so the Charge 2: pretty enamoured with it, for a few hours. Before I launch into the moaning, let me lay out some general likes & dislikes.....

Despite its claims it does NOT have full WP connectivity, so I was basically mis-sold it. It does connect to update the app, but it cannot use the phone's GPS for activity tracking or phone notifications. When I raised the issue I was told they were working on it and it could well be fixed (spoiler alert: it hasn't been), and I was given a 6 month subscription to FitBit premium which is kind of pointless after about a day. I don't really get why anyone would pay the monthly fee for this service - mostly what I get out of it is a daily total from calories-from-activity, which would really be better that the calories-from-time-in-heart-rate-zones available on the app.

In addition to not being able to track using GPS, there is no way to alter the length of your running gait, so FitBit underestimates my running distances by around 10-20% (I know this because I have to wear my trusted Garmin Forerunner 410 as well for running or cycling if I've any interest in distances covered).

I could have put up with that happily though. I'm used to a crappier service from everyone. Really the only issue here i that I felt FitBit had purposefully mis-led me.

Within 3 months, the screen had cracked. 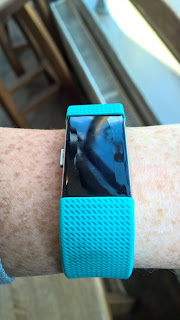 10th May - after purchasing on 29th January 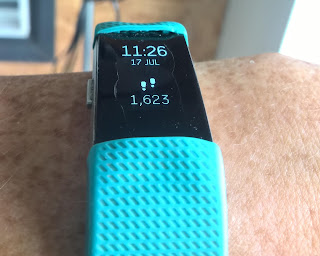 Now - at less than 6 months old - the strap is coming apart, the screen has continued to crack, it's less responsive to finger taps (which is how it's controlled), it no longer gives me details of activities after I've finished them and I'm pretty sure it's underestimating my steps by around 10%. It's DEFINITELY underestimating the number of floors I've climbed, and I'm worried about it getting at all splashed because that could be the end of it. Not being funny, but these things should be supposed to last for years.

When I raised this issue with FitBit, I was told in no uncertain terms that this was NOT covered because this was user damage - it is not; no specific impact caused this to happen - or wear & tear. Let me just lay it out: if this sort of damage is counted as wear & tear within 3 months, this has not been designed with sufficient resilience for the purpose for which it's intended. In refusing to accept this, FitBit have effectively said that a) I am lying and/or b) they have not used sufficiently hard-wearing materials or design. Given that this is a fitness tracker, likely to be worn by active people, which they literally advise you to wear as much as you can, and that I do not have a particularly hard-wearing life and if I do activities like DIY which are more likely to result in damage, I take care to protect the tracker, or - more usually - take it off..... given all this, I think it's beyond unreasonable to shirk any responsibility for mis-selling a piece of kit.

They wouldn't budge - they had the gall to offer me a discount off a new tracker, but couldn't tell me why I'd buy something else from them when my only purchase so far has proved so disappointing.

Basically.... it has helped my fitness but I kind of wish I hadn't been effectively forced into choosing a FitBit and instead had been able to go with a Garmin. Obviously my next phone will not be Windows system at which point I'll have free choice, but I'll definitely be going with another make.

All-in-all; I'm not surprised FitBit are losing their lions' share of the fitness tracker market if they consider the Charge 2 to be a decent piece of wearable fitness for anyone with a vaguely active life.