Last year, as a Christmas present, I unashamedly asked for a pretty valuable gift. I asked my mum to gift me some of her time to help me sort through some of the mountain of stuff I have in my house that I don't want.

It's difficult to describe the effect that owning so much stuff has on me. I inherited an awful lot of things from my dad. He died on the 29th May, 2009, and I spent a large part of the subsequent summer trying to sort through his belongings, but there was just do much, it was impossible for me to do, despite the amazing help I got from so many friends. Eventually, when I'd reached my limit in both time and effort, I hired a removal van and stuck it all in storage. When I moved into my house a little over four years ago, I moved all this stuff in. I've been slowly sorting through it, and every now and then I have a bit of a breakthrough, and I feel a little more space.

But last Christmas, I still had so much stuff. The problem is, I feel the need (and I mean, I NEED) to sort through it before getting rid of it. Then I have to decide what to do with it - throwing things away is an absolute last resort (often a necessary resort, but still). So I have to sort things into sell (sub categories: eBay, carboot), give away (sub categories: friends, charity shops, freecycle), re-use (scraps of cloth, wood, metal - could well be useful!), and then recycling (sub categories: collection or dump).... and very last, bloody bin it. And that's just deciding what I should do, let alone actually getting on and listing, posting, packing, going to a carboot, giving away..... So getting my mum in with her disinterested viewpoint was a real boon. I had a big breakthrough, I got rid of quite a few things - but this seemed to pull out some vital stone in a wall I didn't realise I'd built, and promptly lead to a depressive episode. At the time, this felt horrible, as anyone who read this blog or spoke to me at the time will know, but ultimately it was a good thing. I hit rock bottom - but this gave me a platform from which to push off. It's been a journey, and I'm still occasionally stumbling, but the last year has seen some important changes - I'm still in counselling, I gave up my PhD, I got involved with Riverside Sourdough - something I love and truly believe in. I've slowly learnt that all the hallmarks of success and happiness that I thought I should be aiming for are not necessarily the ones that will actually make me happy.

This is the main theme of "Everything that Remains", a memoir by The Minimalists, which my friend Sally suggested I read as part of her new online book group (join in on Instagram! #pageturners #readcreateshare). A lot of it wasn't applicable to me (I do not have an insatiable need to buy new things, I don't always want new gadgets, I can't remember the last time I bought an item of clothing (bar socks and pants) at full price - most of my stuff comes from charity shops!). But, yes, I have inherited a lot of stuff.

I feel almost like a custodian, with a responsibility divvy it out the best I can. But that is a herculean task when you know how much of a collector my Dad was, and that's not even counting my Grandpa, whose stuff I have inherited after his death in September 2013. My dad's sister is still around, but there has been a massive breakdown in communication, and it doesn't seem there is a way to sort things out reasonably, without me being subject to accusations, including stealing from my Grandpa's dead body or whatever else she sees fit to make up and bandy about to anyone who will listen to her (a group which has pretty much diminished to zero members). All that is to come, and while I hope it will be easier that my dad's stuff, I am still terrified of letting go of some precious family relics. The worst thing is, all these relics.... I don't even know what they are, but I would still find it nigh on impossible to chuck away photographs, diaries, letters..... I know this may not make sense to everyone, but I've been brought up by a hoarder (sorry Dad, it's true) and it's not easy to break those early-learnt behaviours.

The authors, Joshua Fields Milburn & Ryan Nicodemus, made some really good points - a big one that I've taken away is to ask "does this add value to my life?" which is great in a lot of situations, but often I find that is a difficult judgement to make. Also, the main author really quite brushed over getting rid of his mum's stuff - he didn't even mention what happened to her dog! But as a direct result of reading this book, I've set myself small tasks. The first was to sort things into: eBay, Freecycle, car boot, and then begin to act on the first two. The carbooting will have to wait for a couple of weeks, but everything that comes back from that will either go straight to donating to charity shops, or if I enjoyed the experience and have a small number of items left that I still think someone would like. I'll head to a different market. The great thing is, once you start getting rid of stuff, the catharsis that results and the space and order that it inevitably leaves behind is such a big motivator that actually I start enjoying getting rid of things. But it's always good to let people know of your intentions and think that there might be someone who's tracking your progress, so with that in mind, here are some pictures of the first wave. (Well, almost.... Mum 'helped' me clear out my wardrobe recently, so a whole bin bag went to London to be sorted through by my sister and her friends. 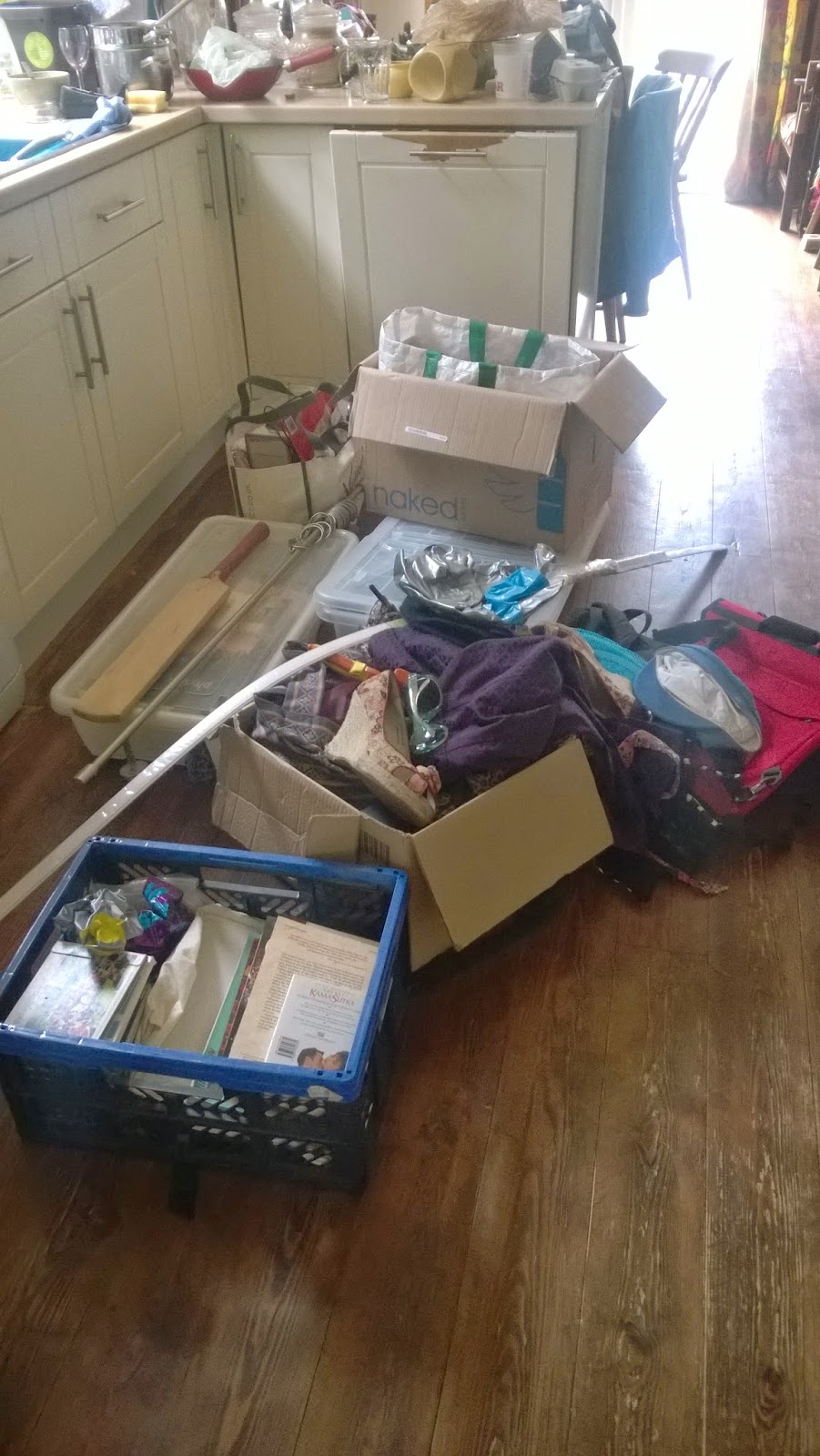 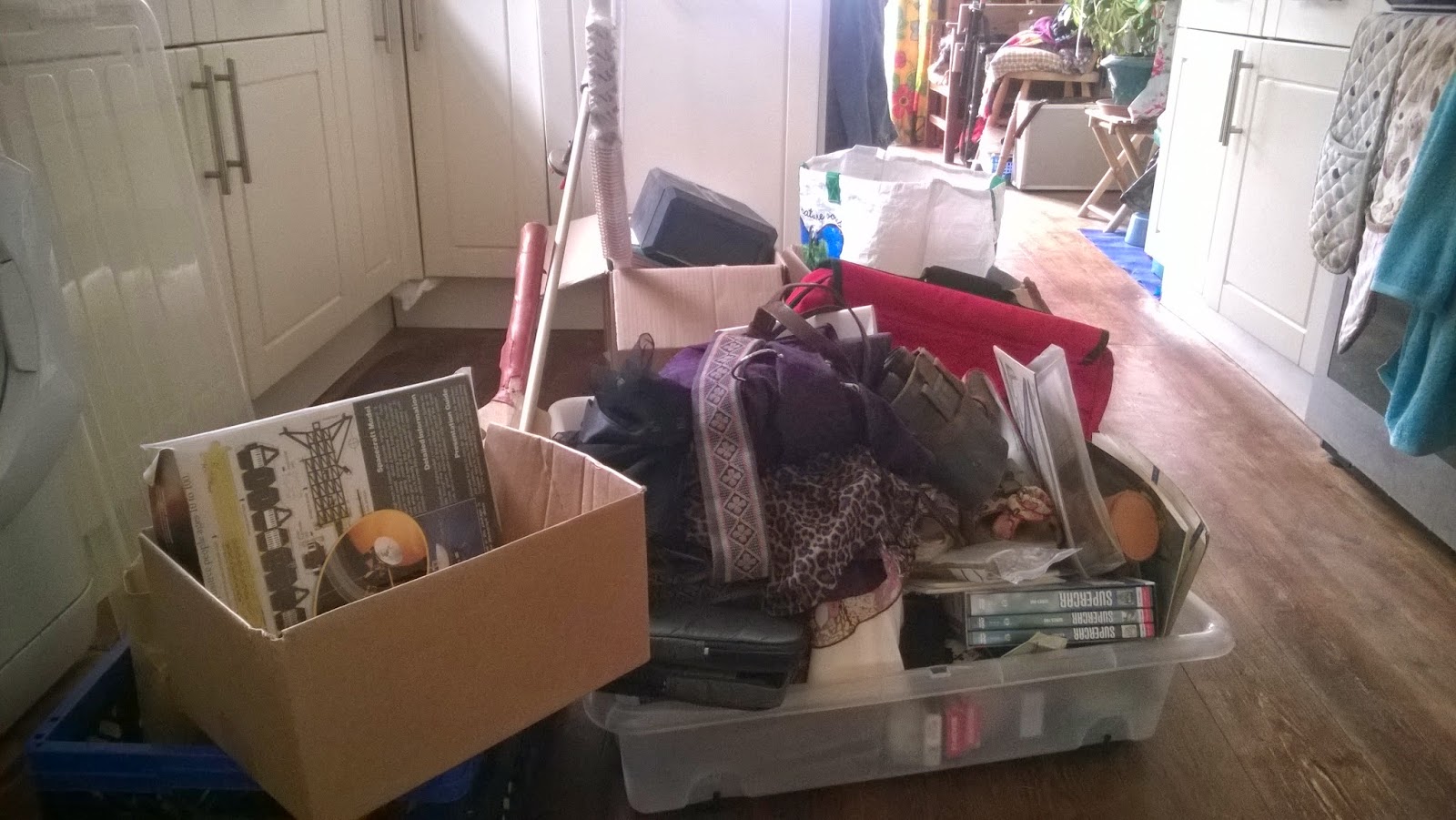 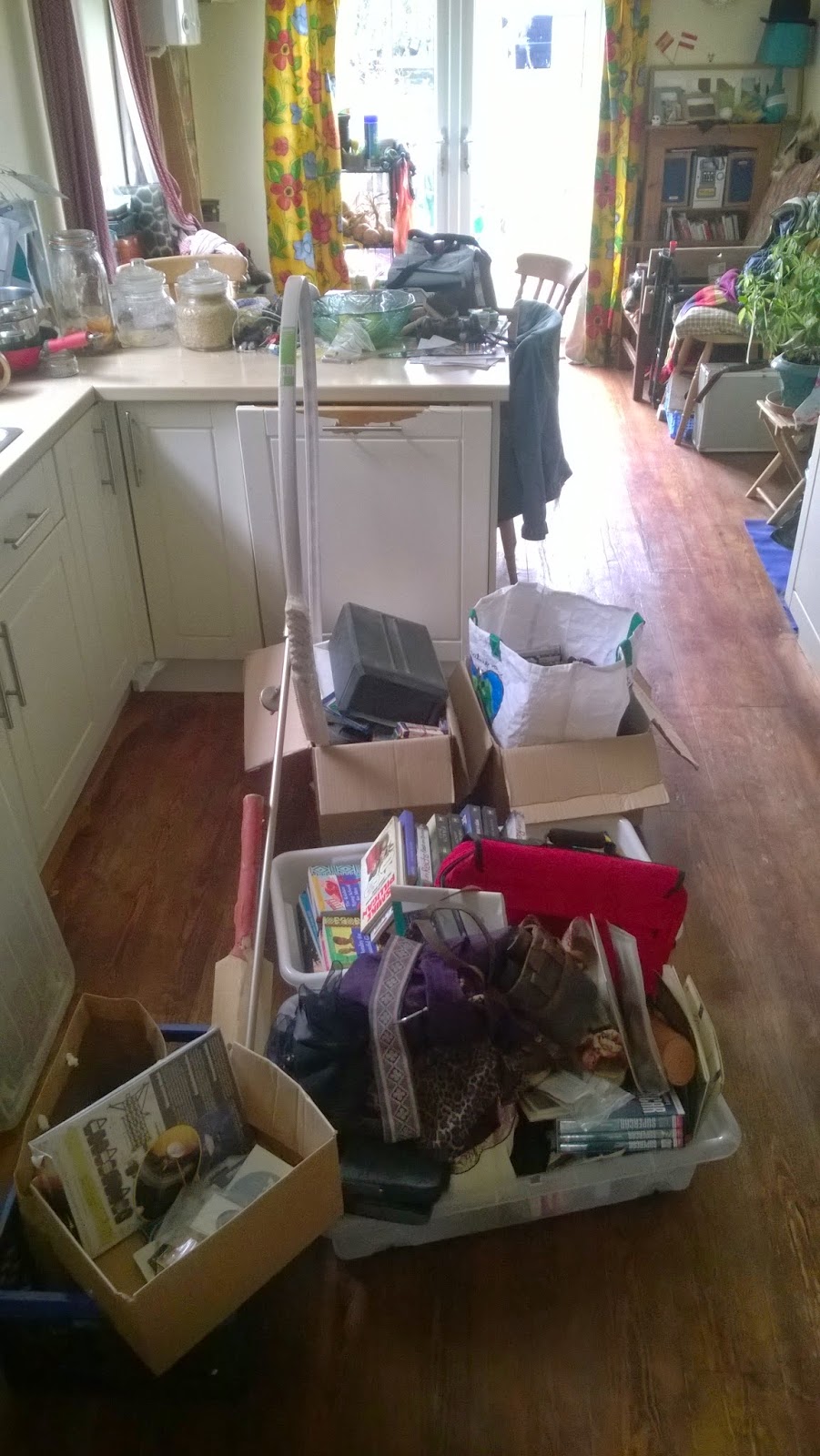 Post-sort: The eBay pile is front-centre, the Freecycle box front left, and the car-boot/else-wise pile behind 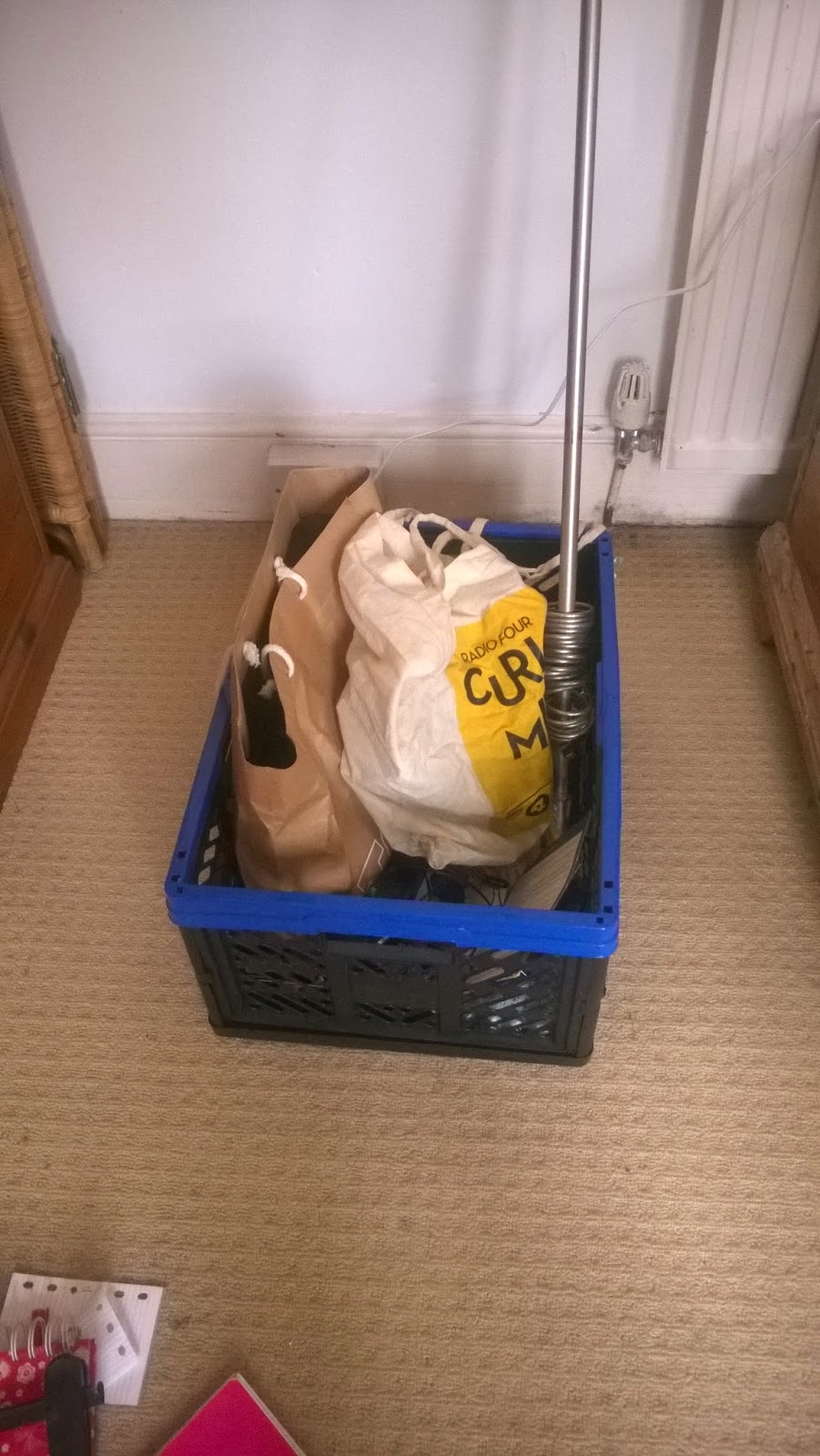 But the main thing I took from the book can be summed up in this quote:

"These days, I have little desire for new material possessions (although that baleful yearning still lingers from time to time), but I do want to be successful. And success for me has little to do with money, or possessions, or status. Rather, success is a simple equation: Happiness + Growth + Contribution = Success. That's the only kind of success I know. Hence I want to partake in work that makes me happy, work that encourages me to grow, work that helps me contribute beyond myself. Ultimately, I want to create more and consume less. Doing so requires real work"

I have had some moments of self-doubt since jumping off the track I was on - have I made the right decision? What am I doing with my life? Where will this lead me? Can I still consider myself a valuable member of society? Reading this brilliant book, and especially what is says along the above lines, helps me to appreciate that I can uncouple success with what I thought I should be doing, and just focus on things that actually bring me really joy, contentment, satisfaction and - yeah, growth. Mainly into all that space I'm creating by shifting my stuff!
Posted by Unknown at 10:22