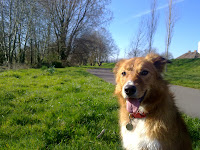 In honour of the splendiferous weather, and to avoid jumping straight into any kind of training regime, I took Bronwen, who is temporarily in my care, out for a walk along the Taff Trail. Initially I just thought I'd wander round the parks but it was absolutely rammed. Whilst I've no fear about her behaviour per se, she doesn't really pay any attention to anyone else around, walking, running OR cycling, so not wanted to leave anyone with severe falling-/tripping-related injuries, I thought I'd wander in the direction of Castell Coch, which resulted in a 12.1 km long walk, in around 2.5 hours. Bronwen was ecstatic to be out, running around like only a collie can. I was a little worried at one point ans she started to go into a sheepdog-like crouch when we came in sight of some small fluffy white dogs. Luckily I managed to distract her with a stick - which quickly turned into a series of sticks of various shapes and sizes: 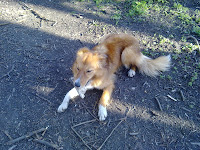 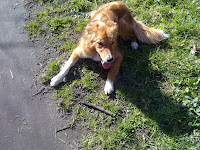 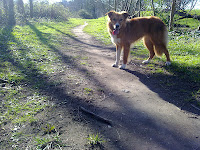 Each of which was as proudly loved as the last. She can get embarrassingly frantic about sticks, shrieking and barking until you throw them. Luckily she seemed to enjoy carrying the stick almost as much as chasing after it today. For a collie, Bronwen is inordinately fond of water (thanks to her spaniel older brother), and a couple of times leapt bodily from the bank into deep water after a stick (one time I unfortunately misjudged the steepness of the bank and had to get down on my hands and knees and yank her out, much to the amusement of some passers-by...). Happily, for my peace of mind, more stickchasing was done in a more sedate manner: 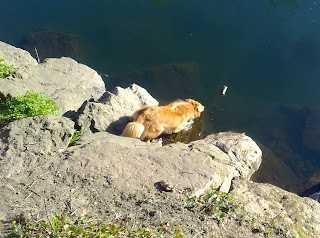 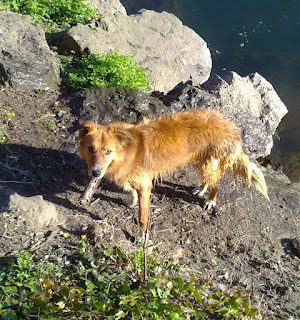 Post stick-collection, at least three thorough shakes are required.... otherwise you ended up with a bedraggled lump of ginger fur....

She's now conked out at my feet - I would be proud that I'd outwalked a collie but to be honest, she probably went about three times as far as did I, with the odd spot of swimming too. But she remained zoned long enough for me to plant some marigolds - for the nematodes - apparently they're good for protecting just about any veggies?

Congratultations to the Scarlets, who we watched beat the Cardiff Blues yesterday evening, accompanied by some lovely choral singing, including Calon Lan and Yma o Hyd, Cwm Rhondda and of course, Delilah. Llongyfarchiadau, Y Scarlets!
Posted by Unknown at 22:06 No comments:

Second step on a 13.1 mile journey

Once again I'm dipping my toes into the blogosphere (previous travel blog here) although sadly I'm no longer travelling around the world, so I suppose I will have to up the stakes in terms of actual writing quality.

I decided to start this blog as I've recently taken a decision to achieve what until recently I would have assumed to be impossible, and run the 2012 Cardiff Half Marathon. This may not seem a big step but for years I have assumed I am lazy, overweight and incapable of achieving significant physical milestones such as this. I did a 5 km run years ago when I was first told I should lose weight, and it worked, and massively improved the way in which I see myself. But I never would have run longer distances - 5 k or 30 minutes was really my limit.

Then, a couple of years ago, the unthinkable happened and my wonderful father, to whom I was extremely close, died suddenly in a freak hot-air balloon accident. It sounds like ridiculous fiction; it's true. This is not the post in which to write how I felt about that - maybe that will come in the future. However, suffice to say, I found one of the only things that would let me escape my own internal monologue was completely exhausting myself through running, and so I took it up again.

For the last 2 years or so I have kept a spreadsheet with my speeds and distances, because that is the kind of dork I am (and proud of it) so I can track my improvements, which are small but significant.

Last year I entered the Race for Life 10 km in Clapham, London. Unfortunately, the course was messed up and I didn't actually end up running the full distance. Not achieving my very simple goal (RUN TEN KILOMETRES, IDEALLY IN SIXTY MINUTES!) just meant that I promptly had to enter another race in Cardiff. This one I completed, in 67 minutes. The very fact that this was achievable set me to wondering whether all the people who had exclaimed to me how surprisingly easy it was to run 13.1 miles may actually be right in assuming that the same might be the case for me. So it was that 3 days ago I finally bit the bullet and entered myself and my wonderous friend Sophie into the Cardiff half.

It's a long time away however (7 months and counting), so I need to get a ball of motivation rolling, and build up such momentum that I can hit my targets and achieve the formerly-impossible. To help me in that, I've decided to write about my next few months, including the highs and the lows and various & numerous opinions about the world, even if it's just for my own personal posterity. Alright, mine and my mum's....
Posted by Unknown at 13:41 1 comment: